GIVEAWAY! Trish Milburn Books: “Having The Cowboy’s Baby” & “Out Of The Night” – 2 Winners! 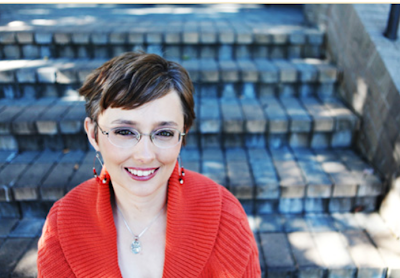 We were so honored to have the chance to interview the talented and delightful Trish Milburn about her books, being an author and living a frugal lifestyle!

Tell us about your latest book.
I actually have two books out in back-to-back months. In September was the latest installment in my Blue Falls, Texas series from Harlequin American Romance, Having the Cowboy’s Baby. This series is set in the Hill Country of Texas and revolves around the small tourist town of Blue Falls, home of wildflower tours and monthly rodeos that bring lots of good-looking cowboys to town.
Skyler Harrington is a planner. After the tumult of her childhood, she’s built a life for herself in Blue Falls, Texas, that’s comfortable, predictable, safe. The last thing she needs is to go gaga over a rodeo cowboy. It felt great to let her hair down with sexy Logan Bradshaw, but she’ll be happy if their paths never cross again. A surprise pregnancy is something neither expected. Skyler has no intention of letting her baby grow up the way she did, with an unreliable father. She’s willing to raise their child alone, but Logan is determined to prove there’s more to him than being a devil-may-care risk taker. He’s daddy material!
And out as of Oct. 1 is Out of the Night, my first Harlequin Nocturne. It’s a new take on the vampire genre, just in time for Halloween. Since the death of her fiancé, it is Olivia DaCosta who continues his good work feeding the homeless. Every day is a lone struggle to keep her diner open, more than two years after the plague that devastated the human population. Now, amid the chaos, a vampire race has begun stalking the survivors. Because of her rare blood type, Olivia has learned to avoid vampire contact—until she meets one she can’t resist. After Campbell Raines saves her life, it’s clear there’s no ignoring their potentially fatal attraction. In the arms of this haunted yet captivating cop, Olivia will discover that vampires can love just as passionately as they kill….

How did you get started writing?
I’ve loved creating stories ever since I was in elementary school. I still have the first “book” I ever wrote, a small, cloth-covered, handwritten and illustrated tale called Land of the Misty Gems that I wrote in sixth grade for an assignment. From there, I joined the newspaper staff in middle school and continued on into high school and college, earning a print journalism degree and eventually working at newspapers and a feature magazine before leaving to write books full time.

How many books have you published?
It’s hard to believe, but since selling my first book in 2007, I’ve published 22 books in the romance and young adult genres and just sold three more books in my Blue Falls, Texas, series to Harlequin at the end of September. I also was part of the launch of the Kindle Worlds program over the summer which offers stories set in established fictional worlds, a partnership between Amazon and the original copyright holders. I provided three stories set in the world of The Vampire Diaries.

How did you find out about The Binder Ladies?
My sister, Mary, is a fan and told me about it. Frugality has been a part of my life from the word “go.” When my sister and I were young, it was by necessity since we were not well off when we were growing up. And even now as a writer, I have to keep a close watch on finances. There’s a misperception out there that writers make a ton of money. This is true of remarkably few, the big names such as J.K. Rowling, Stephen King, Nora Roberts, the authors you see repeatedly on bestseller lists. With the advent of self-publishing, it’s opening up doors for more authors to be able to make a living writing. For a lot of us —whether we’re self-publishing, working with publishers, or both as I do— we work seven days a week and get paid sporadically. Even when I sell books to my publishers, I get my advance in thirds – a third on signing the contract, a third when I turn in the proposals, and the final third not until I turn in the books and they’re approved. I have to earn back those advances for the publisher before I start to earn any royalties. So I still freelance some, writing for the magazine I used to work for and doing freelance copy editing. I don’t have the time to dedicate to super couponing, but I do use them when I can, and I buy a good amount of store brand items at the grocery. My husband and I also have never had a car payment. We buy good, reliable used cars. And the absolute best thing is that we paid off our mortgage last year, which relieves a lot of stress. It’s not because we’re rich but because we’re careful with our money and don’t carry debt.

How can our readers find out more about you and your books?
I have a website at www.trishmilburn.com which includes my complete book list. You can also sign up for my periodic newsletter there. Don’t worry, you won’t be inundated with mail. You can also follow me on Twitter at @TrishMilburn or on Facebook at http://www.facebook.com/pages/Trish-MilburnTricia-Mills-Fan-Page/441289945240 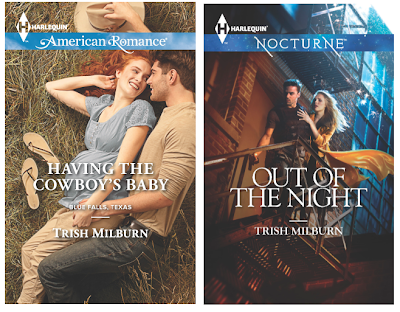 I’ll give away a copy of Having the Cowboy’s Baby to one winner and a copy of Out of the Night to another winner!  Just fill out the Rafflecopter below!
Giveaway will run from October 12th (12:01am PST) – October 21st (12:01am PST).  GOOD LUCK!
a Rafflecopter giveaway
The participating bloggers are not responsible for prize shipment.  Winners will have 24 hours to contact The Binder Ladies before another winner is chosen.  We were not compensated for this Giveaway, and our opinions are our own and genuine.

One in a Melon Giveaway Hop – $10 Amazon Gift Card

This site uses Akismet to reduce spam. Learn how your comment data is processed.